It’s Sharon Raynor again. I spent my 39th birthday weekend with over 62,000 Vietnam Veterans and their families at the Charlotte Motor Speedway for the Welcome Home Vietnam Veterans Celebration held on March 31, 2012. Nearly 50 years ago, approximately 216,000 men and women left North Carolina to serve in Vietnam. About 1,600 of them didn't make it home. The ones that did make it back, including my father, never received a proper homecoming. The time had finally come to thank them for their service and sacrifice. (For some background, see my earlier posts about my oral history project, "Breaking the Silence: The Unspoken Brotherhood of Vietnam Veterans.")

As I was driving from Duke to Charlotte on Thursday, I heard a radio broadcaster say that the final preparations for the celebration were underway. He asked motorists traveling through Charlotte on I-85 North to move aside if they saw the motorcycle and police motorcade that would be escorting a replica of the Vietnam Memorial Wall (the Traveling Wall) to the Speedway. I couldn't help but feel a bit sentimental — the big day for Vietnam veterans like my father was almost here at last.

For months now, this event, said to be the largest gathering of Vietnam Veterans ever assembled in the state of North Carolina, has been the topic of conversation in our homes and at the Raleigh Veterans Outreach Center. The ten-day Heroes Homecoming for Vietnam Veterans hosted by the city of Fayetteville in November 2011 built anticipation for the much larger gathering in Charlotte. My family and the veterans I work with reserved tickets long ago and started making plans. On Friday, as veterans from out of town were making their way to their hotels in Charlotte, we were packing our cameras, beverages, snacks and lawn chairs for what was going to be a memorable and emotional day. 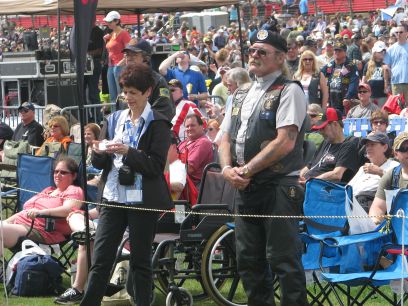 We started our Saturday at 6 am, determined to make our way through all the expected traffic and get to the Speedway. After a quick bite to eat, we grabbed our umbrellas and bottles of water and stepped out into the pouring rain. It was 7:30 when we parked at the Speedway. The gates were opening at 9am for festivities that started at 11 am. My father reminded me that today's weather was nothing compared to being in Vietnam during monsoon season, when it could rain for up to three months at a time.

As we entered, chatting with the other early risers, a huge display screen showed the young faces of men who served. We made our way around the Speedway and saw helicopters, military weaponry and model cars on display. Rolling Thunder opened the ceremony with a grand entrance and local motorcycle clubs were a conspicuous presence, as well. VA services were present to assist veterans and their families and the Montagnard were there, as well. A wreath was laid at The Wall for all those who perished in the war. There was a military flyby that astonished the crowd and there were paratroopers, who received thundering applause. The musical performances by the 82nd Airborne Choir and George Clinton and the Parliament Funkadelics had the crowd singing and dancing.

Amidst all the ceremony and display, there was a tremendous outpouring of community spirit. The sentiment of the day, shared with friends, acquaintances, and strangers, passed between double amputees who made the trip alone and veterans who came by the bus load, was "Welcome Home, Brother. I'm glad you made it back." Veterans exchanged handshakes, hugs, laughs and tears, they were welcomed home by strangers and by cards from children across the nation. Families everywhere watched as their veterans were reunited with long-lost friends and comrades. Sprinkled throughout the crowd were familiar faces from the Raleigh Veterans Center. 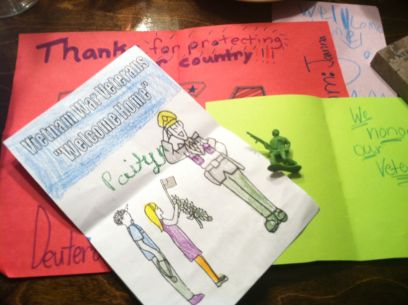 For many years, my father longed to find a veteran he served with or who at least served in some of the same locations. Luckily for him, a man named Jimmy drove by on a scooter with a sign that read, “Bearcat 1968, 5th BN 41st Artillery Brigade.” The two of them sat and talked, sharing memories of Bearcat and looking at old photos of young soldiers. It was a highlight of the day.

The event was a wonderful tribute to those who sacrificed so much for our freedoms. Sadly, late in the day, it was also the scene of a tragic accident. As festivities ended and people were leaving, three motorcyclists were involved in a collision on the Speedway and two of them were killed. One was an Air Force Vietnam Veteran. It was an extra note of sadness on a day that was already too full of reminders of how precious and short life can be.

For us, the gathering continued at the restaurant where we had Sunday breakfast, as veterans found each other for more conversation. There were stories about growing up on a farm in Oxford, NC before leaving for the war. Two men who had served in the same unit in Vietnam were reunited after 40 years. We made our way out after many rounds of hugs and handshakes, only to run into more veterans outside the restaurant.

The weekend was more than just a long-overdue homecoming for Vietnam Veterans, it was a time of remembrance and healing for everyone whose lives have been touched and affected by war.